As Busy As a Beaver 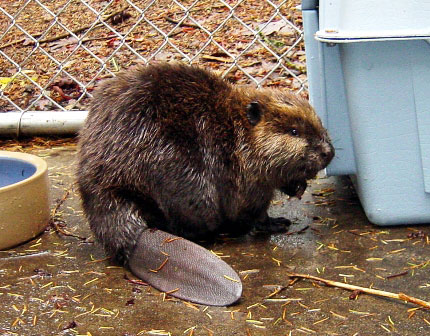 The Beaver Caster Canadensis is an impressive and industrious mammal belonging to the rodent family. (The Capybara of South America is the only rodent larger than the Beaver.) The fur trade and the demand for beaver pelts opened up this vast country and the Hudson’s Bay Company was established in the 17th century. No other animal shares the distinction of contributing to the exploration of Canada. In 1975 the beaver was made the official emblem of Canada the highest award ever bestowed on a rodent.

Unless threatened or cornered beavers are gentle, docile and very busy creatures. Second only to man, beavers are true environmental engineers with the ability to change the landscape to suit its own needs. This act of self-preservation has a very beneficial side. The dams create wetlands, prevent erosion, raise the water table and create an ecosystem that breaks down toxins, pesticides and purifies the water.

This then allows for many other species, insects to take up residence on or near the beaver pond. Many of the endangered species in North America rely on wetlands. Due to development many wetlands disappear so the beaver does a great service by creating ponds and waterways.

There are colonies of beaver on Gabriola. Many started their life in Hoggan Lake but at reaching two years must disperse to start their own colony elsewhere. This is the most dangerous time in the life of a beaver when they leave the safety of their birthplace. They can travel up to 12km in search of a suitable place. GROWLS have had calls where a beaver has been struck by a vehicle or attacked by dogs. Other predators vary from region to region such as otters, wolves, lynx, bears, hawks, eagles, owls, coyotes, to name a few. The kits are most vulnerable and need the adults near and both need the protection of the water.

Beavers have a large wide head with a compact rotund body. Strong graceful swimmers they are ungainly when moving about on land. They are about 1m in length and weigh 16 to 30 kg. When submerged ears and nostrils have valves that close to prevent water entry. A third eye known as a nictitating membrane, which protects the eye and allows them, to see underwater. Lips are fur lined to form a seal behind their teeth so they are able to gnaw twigs underwater. Very strong orange enamel teeth (due to the iron content) sharpened like a chisel are able to handle and drag a 9kg piece of wood. 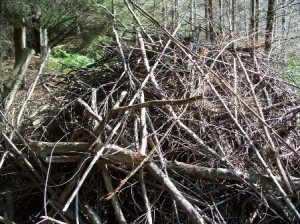 Front feet are very dexterous hand like and can easily hold sticks, rocks, and mud and can perform a variety of complex construction tasks. Back feet are larger, webbed and used as rudder while swimming. Their impressive tail is 30cm by 15cm and is black, broad, scaly and flat. Sometimes used as a third leg while standing upright, and an alarm system when slapped on water creating a sound similar to a gunshot.

Beaver fur is luxurious! An outer layer of long glossy guard hairs from brown to black while the under fur is short, dense and fine from gray to brown. It was these qualities that kept up the demand for pelts for coats, robes, top hats, clothing trim by European nearly leading to extinction of the species.

Their dams are engineering marvels and form pools and ponds needed to build the dens/lodges underwater entrances. The lodges themselves are like a modern day condo with an entry chamber for drying off and eating with a second chamber for sleeping and raising their kits. Usually 3m high by 6m wide although bigger lodges are not unheard of.
Beavers are herbivores and love to eat water lily tubers, clover apples, and leaves. Their highly specialized digestive system helps them digest up to 30% cellulose from the tree bark and woody things they consume. 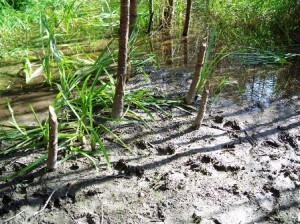 A monogamous species they mate for life. After a gestation period of 100 days one to four kits are born late April to June. Kits are born with eyes open, covered with soft fur weighing about .45kg start swimming within half an hour of birth. Weaning takes place two weeks later.

The beaver has been depicted on seven stamp issues, the nickel, the mascot for the 1976 summer Olympics, Hudson Bay, CPR, and several provinces coat of arms the greatest bush plane ever built deHavilland Beaver, to name a few.

If you have beaver on your property please contact LIZ 250 247-8805 we would like to track their whereabouts. If you have beaver and there is conflict PLEASE DONOT KILL them (this has happened in the past) instead call GROWLS 250 714-7101----- lets try to work out a solution.