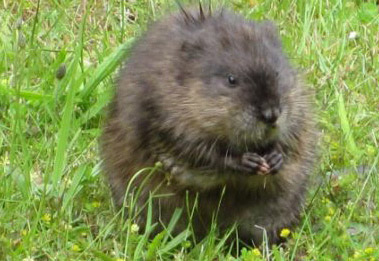 [imageeffect type="lightbox" align="alignleft" width="250" height="188" alt="Muskrat-Photograph by Brian Hoag" url="/wordpress/wp-content/uploads/2011/12/muskrat-ramble-01.jpg" titleoverlay="yes"]The Common Muskrat ondatra zibethicus is another interesting mammal found on Gabriola and right across North America. Originally called” Moskwas “or” Musquash “by the Abnaki First Nations because of a musk-like discharge released during breeding season as means of marking territory or to communicate with others while traveling. The name eventually became Muskrat because of the association with musk.

Sometimes referred to, as a “mini-beaver” the muskrat is actually a highly specialized aquatic vole. An expert swimmer muskrats can dive easily, stay submerged for up to fifteen minutes and swim the length of a football field underwater. This animal is more comfortable swimming in water than traveling over land. Like a beaver it has large orange incisors and when chewing underwater can close its lips behind its teeth so mud or water will not enter its mouth.

At first glance to some, the Muskrat looks like a large rat. This mistaken identity could be detrimental for the little animal. One noticeable difference is the long thick black scaly tail 20

[imageeffect type="lightbox" align="alignright" width="250" height="188" alt="Muskrat-Photograph by Brian Hoag" url="/wordpress/wp-content/uploads/2011/12/muskrat-ramble-02.jpg" titleoverlay="yes"] to 28cm in length, which acts as a rudder when swimming. Their bodies are rotund and covered with long shiny black guard hairs, which overlie a thick waterproof brownish grey coat. The front claws are long and strong which aid in the gathering of food or denning material. Large partially webbed hind feet propel the muskrat through the water.

Muskrats are busy, busy, busy. Open water of lakes streams sloughs marshes where cattails, rushes or pondweed can be found is where you will find muskrats. They are constantly chewing on cattails and bulrushes whether eating the tender shoots or gathering coarse vegetation for lodge building. Muskrat lodges with underwater entrances rise above shallow waters and are entirely built from herbaceous vegetation. Often geese or ducks seek out these mounds and use them as nesting platforms. Predominately herbivorous but in lean times or after hard winters muskrats will eat frogs, turtles, mussels, snails, and crayfish. In colder climes during winter freeze up they stay within their lodges feeding on submerged vegetation.

Breeding takes place between March to September and females can produce up to three litters a year. Gestation lasts 25 to 30 days with a litter of six to seven young. Born blind and helpless their eyes open after a couple of weeks. Weaning takes place three to four weeks later and then off they go to live their own lives in a bigger sometimes-hostile world.
Muskrats are not an endangered species and in most areas have a healthy vibrant population. Trapping as a food source and for their highly prized fur has been occurring for centuries. Muskrat fur coats are still in demand as a fashion statement as the fur can be dyed to look like mink or sheared to resemble beaver. (Thirty muskrats need to be harvested to make a coat.) Predators then include human activity, mink, raccoon, wolves, hawks, owls, eagles and dogs.

Muskrats are highly regarded by First Nations peoples. In one story, it was Muskrat who brought some mud from the bottom of the flooded world to the water’s surface. This mud was spread over turtle’s back, thus creating all the dry land we now know.
Muskrat another engaging little creature we share our wonderful island with.
The idea for this article came from an observant Flying Shingle reader Brian Hoag . Out on his usual picture-taking prowl he spied this little muskrat enjoying some greens and quickly snapped some photos.

Links
More about muskrats
Growls Website — For All things Wild