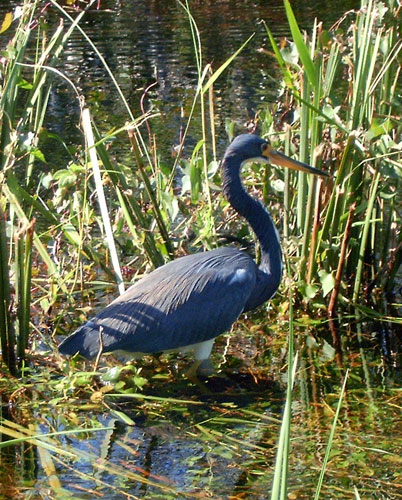 Wetlands are one of the most important life support systems on the planet comparable to rain forests and coral reefs. Once considered worthless, wetlands were drained, filled, eliminated all together because it was thought they were disease filled, stinky, insect infested, and polluted. Urban development, population expansion, agriculture, also figured in to the destruction of wetlands. The last fifty to sixty years saw a change in the way we approach wetlands, scientists now know the valuable contribution wetlands provide. The complexities of wetlands ecosystems are still developing but we now know and have documented the benefits. What is the definition of wetlands? The Ramsar Convention of Wetlands 1971 describes wetlands as follows:

Wetlands are areas of marsh, fen, peat land or water, whether natural or artificial, permanent or temporary, with water that is static or flowing, fresh, brackish, or salt, including areas of marine water the depth of which at low tide does not exceed six metres. (Canada joined Ramsar in 1981 and has 35 sites protected under this treaty.)

Some of the Types of wetlands include:

SHALLOW WATER WETLANDS – permanently flooded floating leaved pond weed, hundreds of birds, invertebrates, animals, fish, insects rely on the critical habitat wetlands provide and more importantly many of the species on the threatened /endangered list rely on wetlands for their cycle of life. Migratory birds who are part of the winged migration and who fly thousands of miles seek out wetlands for rest, food.

FLOOD PROTECTION – acts like a sponge, holds excess water after a storm and then slowly releases the water. (Louisiana had destroyed many of the wetlands around New Orleans once the levees were breached flooding was unstoppable)

FISH AND WILDLIFE HABITAT, RICH SOURCE OF BIODIVERSITY
Gabriola now has some protected wetlands, The Elder Cedar Reserve which has a seasonal stream and bog, The 707 Park, Coats Marsh, Joyce Lockwood Park, Hoggan Lake. Other wetlands are parts of Lock Bay, stream that starts along North Rd and carries crosses under South Rd to the Golf Course. There are many private ponds, which are rain filled and offer refuge to wildlife. Many of these pond owners attended a Frog Monitoring talk hosted by GROWLS for the Islands Trust in 2008. However in the past many properties with wet areas were drained, trees removed, truckloads of fill brought in to build up the property then sold for housing. Large areas containing ferns, mosses salmonberries, skunk cabbage were lost.

What can you do to help? Write your local, provincial, federal governments about protecting wetlands. (6% of BC is wetlands and 14% of Canada) Gabriola is a finite space; perhaps create a backyard wetland on your property. Wetlands can be a source of wonder and amazement, educational for young and old. Beneficial for the many inhabitants, butterflies, dragonflies, frogs, newts, salamanders, snakes.

Many writers have called wetlands the kidneys of the earth because they filter and clean the water that flows through them. But they are also the bladders of the earth by virtue of their water storage ability. For their role in transforming nutrients, wetlands are also the earth’s digestive tract, and for their ability to filter toxins, they are the liver as well. (Linda Nolan and Bill Jefferies)