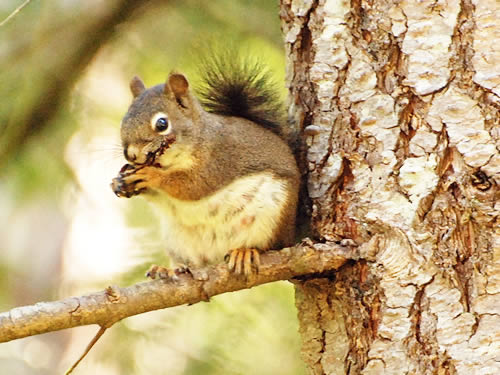 The American Red Squirrel, Tamiasciurus hudsonicus, is an engagingly feisty little animal. Although primarily a creature of coniferous forests, the diurnal red squirrel also inhabits deciduous woodlands and can even be found in suburban and near-urban areas throughout their range. Their adaptability in terms of both habitat and food sources has made them remarkably successful. These delicate looking little animals, weighing not much more than about 230 g, are in fact aggressively fearless, not at all reluctant to chase intruders many times their size. People get a kick out of seeing these squirrels stamping their feet, flicking their tails, and scolding vociferously in what seems like a paroxysm of rage. Its loud, rolling "Tcher-r-r" and scolding chatter are familiar sounds in the forests. The American Red Squirrel packs a lot of "attitude" into its small frame.

Red Squirrels have a total body length of from 280 to 350 mm, with the tail making up from 95 to 150 mm of that. Fur color is highly variable. Red squirrels in different part of their range can look quite different. Color changes between summer and winter as well. The fur on their back is usually brownish or olive-red in color. During the summer, a black stripe runs along their side, between the fur color of their back and their belly. The belly is white or cream color. (this white belly helps to distinguish the Red Squirrel from the very similar Douglas Squirrel.) The tail is often edged with white. There are white bands encircling their large, black eyes. The tail is not as thick or bushy as other North American tree squirrels. They are well adapted for climbing and running through the trees with compact, muscled bodies, strong claws, and powerful hind limbs. 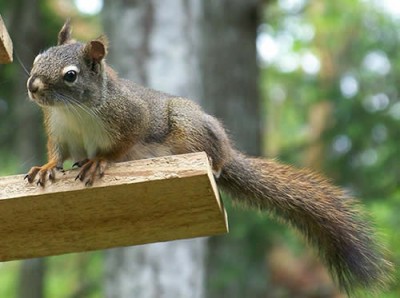 Red Squirrels are not picky eaters. They consume seeds, fruit, nuts, bark, buds, shed antlers, tree sap, pine cones, fungi (including mushrooms that are poisonous to humans), eggs, mice, young birds and young rabbits. However, they eat primary the seeds of conifer trees. They may eat up to 2/3 of the pine seed crop in an area each year. Red squirrels store many seeds and nuts underground, in piles, or under rocks for the winter (they do not hibernate). They are able to relocate these buried seeds 30 cm underground and 4 meters below snow with their tremendous sense of smell. Many seed stockpiles (middens) are not recovered, however, making red squirrels a key tree planter and seed disperser. Red Squirrels also clip and gather mushrooms and place them amongst the branches of trees to dry them in the sun

Nests are most commonly constructed of grass in the branches of spruce or pine trees, or cavities in the trunks of trees. Red squirrels rarely nest below ground. Each individual squirrel has several nests within its territory and females with young move offspring between nests. They will on occasion make use of things like insulation for their nests.

American Red Squirrels are spontaneous ovulators. Females enter estrus for only one day, but venture from their territory prior to ovulation and these exploratory forays may serve to advertise their upcoming estrus. On the day of estrus, females are chased by several males in an extended mating chase. Males compete with one another for the opportunity to mate with the female. Females will mate with 4 – 16 males. Gestation has been reported to range from 31 to 35 days. Females can breed for the first time at one year of age but some females delay breeding until two years of age or older. Most females produce only one litter, but in some years reproduction is skipped while in other years some females attempted to breed twice. Litter sizes typically range from 1 to 5, but most litters contain 3 or 4 offspring. Offspring are pink and hairless at birth and weigh approximately 10 g. Offspring do not reach adult body size until 125 days of age. They first emerge from their nest at around 42 days of age but continue to nurse until approximately 70 days.

Juvenile American Red Squirrels must acquire a territory and midden prior to their first winter. Juveniles without a midden do not survive their first winter. Offspring can acquire a territory by competing for a vacant territory, creating a new territory or by receiving all or part of a territory from their mother. This somewhat rare (15% of litters) female behavior is referred to as breeding dispersal or bequeathal and is a form of maternal investment in offspring. The prevalence of this behavior is related to the abundance of food resources and the age of the mother. In some cases females will acquire additional middens prior to reproduction, which they later bequeath to their offspring. Offspring that do not receive a midden from their mother typically settle within 150 m (3 territory diameters) from their natal territory.

Red Squirrels can be endlessly entertaining and their behaviour coupled with their undeniable cuteness can make them a lot of fun to have around. Yes, they will clean out your bird feeders given half a chance. One solution is to provide a squirrel feeder (kind of a cedar box with a light lid that the squirrel can easily lift up, a plexiglass front so he can see the peanuts inside and a “porch to sit on once he has his peanut. Attach it at a safe height on your squirrel’s favorite tree and enjoy the results!!