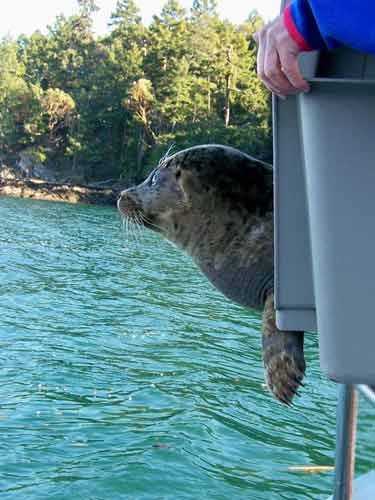 (click on the image below for a larger version)

Back in November of 2008 we told you the story of Geneva, a seal pup rescued on Gabriola Island, who had quite a dramatic start to life. At that time the little seal pup had just come back to the Island Wildlife Natural Care Centre on Salt Spring Island after surgery to remove cataracts from both of his eyes. Well in early February it was decided that his eyes HAD recovered and that he was eligible for release into the wild. The date for release was set at February 15th and GROWLS was invited down to Salt Spring to take part in this happy event.

Two GROWLS volunteers, Sheila Lake (the original rescuer of the pup) and Jean Wyenberg made the trip down on a perfectly beautiful calm and sunny day. It had been decided that the group would travel by boat to just North of Wallace Island where a large number of harbour seals like to hang out, and so Geneva was loaded into her large crate and onto the boat. 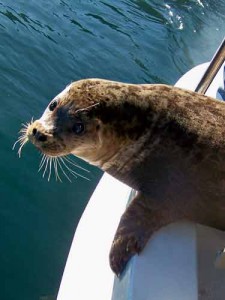 There was a mixed group of travelers in addition to the star of the show. The boat captain and his crew, the helicopter pilot (Norm Snihur) who transported Geneva (and many other injured animals) when needed, the GROWLS volunteers, the eye specialist veterinary surgeon (Dr. Marnie Ford) who was part of the team who performed the cataract surgery and the totally devoted IWNCC care givers (Marielle Bonnet – primary caregiver and Barb Conyer). A group of people who had that one thing in common – a dedication to animal welfare and to the welfare of this particular seal pup in particular.

The boat traveled through some of the most beautiful scenery on the planet while all the group got to know each other and kept reassuring Geneva that this next step in his journey was the right one – a chance at living free in the ocean where he belonged.

When the boat arrived at a beautiful little bay, the crate was maneuvered to the edge and the door opened – one IWNCC caregiver on either side. Geneva was understandably pretty nervous about the whole thing (at one point behaving like the family cat hanging on to the inside of the carrier at the vets office) but eventually his head came out and he took in all of the surroundings including that REALLY BIG pool out there! Suddenly, with a hefty 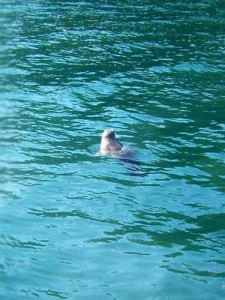 splash, Geneva was back in his natural environment while the onlookers cheered and cried and sent the strongest wishes possible for his well being – along with some fish as a farewell gift. The boat slowly pulled away and Geneva, swimming alone and tentatively in her new world, gradually disappeared from sight. It was a time of great joy and great sadness and some worry. These released seal pups are not tagged in any way – they have been given great care, and released when they are fat and strong and that is all that can be done for them. It is up to them and fate after that.

Geneva is a symbol of all that is wrong with the way we treat our planet and it’s inhabitants and all that is right with the way that we can do our best to help right those wrongs. He is only a seal pup – one of many – but he is much more. We wish you a save journey Geneva.