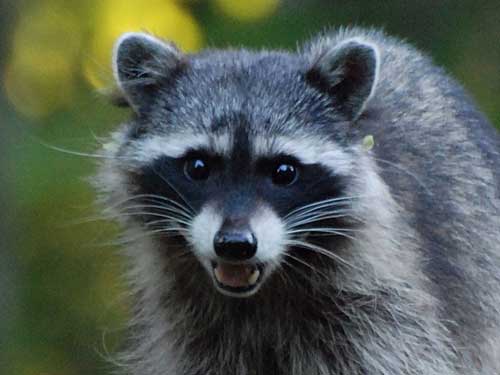 (click on the image below for a larger version)

Raccoons are among the most frequently encountered wildlife we see on Gabriola. The word raccoon is derived from the Algonquain name for this animal, “aroughcoune” which means “he scratches with his hands” . The scientific name is “Procyon lotor” translated as Procyon “before dog” and “lotor” as the washer. Raccoons have thousands of nerve endings in their hands and fingers. It is an asset they constantly put to use, probing under rocks and in crevices for food. 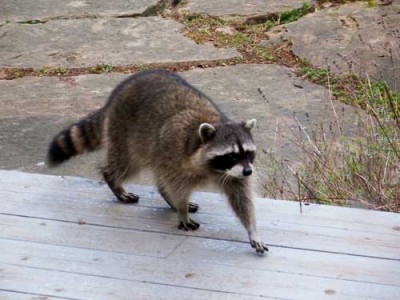 The raccoon is famous for its black bandit mask across the eyes, bordered by white ” eyebrows “ and a mostly white snout. A strip of white fur separates the upper lip from the nose. The coat can run from blackish to brownish grey overall with under fur lighter grayish-brown. Another distinctive trait is the bushy tail, complete with four to six black rings on a yellowish-white background. Small ears but raccoons have acute hearing and because they are nocturnal excellent night vision. They are capable of a wide variety of vocalizations ranging from purrs, growls, snarls, screams, hisses, trills, whinnies and whimpers. Sometimes at night what sounds like a catfight are raccoons especially in mating season, which occurs from January to March.

[imageeffect type="lightbox" align="alignright" width="250" height="188" alt="Raccoons" title="Raccoons" url="/wordpress/wp-content/uploads/2011/12/racoons-31.jpg" titleoverlay="yes"]Lakes, streams, ponds and intertidal zones are where you find raccoons methodically circumnavigating wetlands in search of duck nests or unwary amphibians to dine on. Raccoons do not create their own dens but prefer to search out hollow trees, dense brush piles, rock dens, and ground dens in the roots of trees. The gestation period is around two months and then a litter of three to six kits are born from April to May. They are born blind and their eyes open at about three weeks. At first the mother carries her young by the nape of the neck, as a cat carries kittens. At about six to seven weeks they begin to feed outside the den and by summer are weaned.

The common thought is raccoons wash their food before eating but biologists now believe that the raccoon’s sense of touch is heightened by water and that it is actually feeling for inedible bits to discard.

When threatened or cornered Raccoons can become savage fighters and can inflict great damage with ripping teeth and claws. They are excellent tree climbers and can even descend head first by turning their paws 180 degrees to do so.

Raccoons are part of the fabric that makes up Gabriola wildlife enjoy them when you see them going about their business. They are wild animals please do not feed them. It causes unnatural groupings of animals competing for food. Young ones do not leave to find their own territory if the food source is provided. Keep cat food in the house. Garbage cans should be animal proof and compost covered.