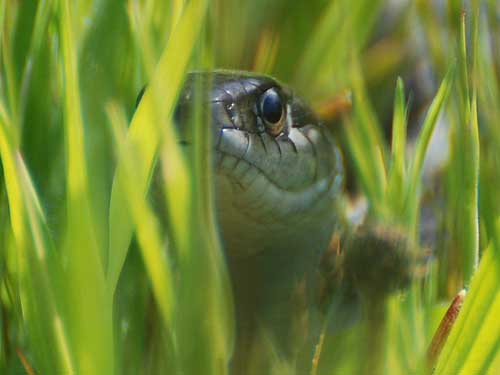 Well that is enough to give some people shivers - but really our snakes are very nice, friendly, non threatening and even beneficial.

On Gabriola Island we only have two kinds of snakes – the Sharp-tailed Snake and the Common Garter Snake. The endangered Sharp-tailed Snake is a tiny, secretive creature - he'd rather spend his time warming up under a rock than moving around where interested folks can spot him. Only about 30 cm long, adult Sharp-tailed Snakes don't bask out in the open; they seek warm spots under rocks, logs or pieces of bark, and human objects such as roofing shingles. Sharp-tailed Snakes are usually found on south-facing rocky slopes of Garry oak and drier Coastal Douglas-fir ecosystems, habitats that are themselves threatened. As more and more people move to this region, Sharp-Tailed Snake habitat is threatened by development. Cars, cats, pesticides, weed-eaters, and loss of sunny micro-habitats also threaten these rare snakes. The good news is that Sharpies and humans can co-exist, if landowners take a few simple precautions. These include leaving natural covers and hiding places, controlling invasive plants, providing a pesticide-free environment, and protecting south-facing slopes. Because there are no legal requirements to protect endangered species on private lands, voluntary stewardship by landowners is critical for habitat protection. 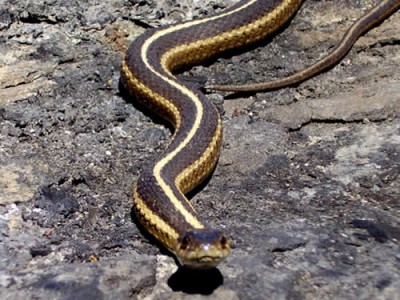 Snake on the rocks

The snake that you WILL frequently encounter on Gabriola is the Common Garter Snake. (that is the snake kind enough to pose for this photograph) The Garter Snakes range in size from 46cm to 1.3m (the larger snakes will occur in the North). They have a black to grayish green body, a large, distinct head and a bright yellow to greenish yellow stripe down the back.

Garter snakes spend the winter underground in dens and then mating occurs in the spring. Males emerge from the dens first, followed by the females. Once the females have appeared, the courting begins. Often many males will pursue one female – the result is a mating ball of snakes, made up of many eager males, and somewhere in the middle of the ball, one very in-demand female. Garter snakes are live-bearing, meaning their young grow inside them until they are fully developed. The young are born usually in July and August and each female will have 10 – 15 young (although they can have as many as 70 or 80). After all this happens, the snakes migrate to summer hunting grounds – usually near water where they can forage, bask on rocks and logs and dive under water to avoid predators. Adult snakes enjoy slugs, frogs, toads, salamanders, tadpoles and insects while the youngsters exist mainly on earthworms. Common garter snakes have a fascinating ability to deal with prey that other predators find toxic. These snakes can eat both the toxic Rough-skinned Newt and poisonous Western Toad without getting sick. That’s not to say they are unaffected, however. As one biologist observed, the poison does seem to daze the snake, making it sluggish enough to appear inebriated!

Note: There are no confirmed sightings of Sharp Tailed snakes on Gabriola Island according to the Species at Risk Biologist from the Ministry of the Environment, but that does not mean we should give up on spotting them (confirmed sightings require that someone first sight them and then actually report them!). So here is a link to information on how to identify this little snake if you are lucky enough to see one with a very clear photo and description and another link toa great deal of excellent information on how to protect them.

Here is who you should contact if you should see a Sharp Tailed snake.