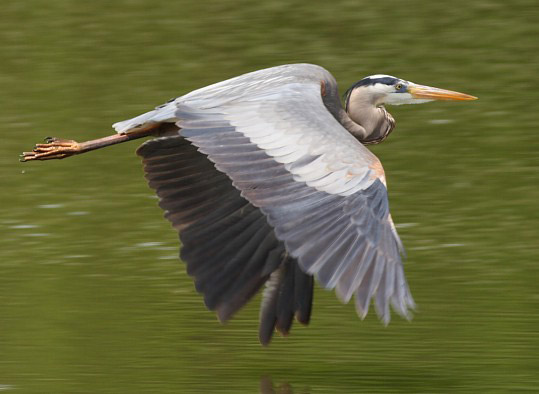 Great Blue Heron (Ardea herodius) is the largest and most widely distributed heron in Canada. Our BC population is unique in Canada as they are in residence all year round. Adults stand over 1 metre in height. Tthe head is white with a black stripe on each side extending back from the yellow eyes to slender black plumes, and the neck is rusty grey. The feathers on the lower neck are long and plume-like, and there are also plumes on the lower back at the start of the breeding season. The back is greyish blue and the breast is white streaked with black. In flight, the neck is doubled back and the head rests against the shoulders. The beak is a dull yellow.

This big guy has a length of over a metre and a wingspan of up to 79 inches.The Great Blue Heron call is a harsh croak. The heron is most vocal during the breeding season but will call occasionally at any time of the year in territorial disputes or if disturbed. It can be found in a range of habitats, in fresh and saltwater marsh, mangrove swamps, flooded meadows, lake edges, or shoreline, but herons are always close to bodies of water, usually nesting in trees or bushes.

The primary food for the Great Blue Heron is small fish, though it is also known to opportunistically feed on a wide range of shrimp, crab, aquatic insects, rodents and other small mammals, amphibians, reptiles, and small birds. Herons locate their food by sight and usually swallow it whole. Herons have been known to choke on prey that is too large. Herons are generally solitary feeders and individuals usually forage while standing in water, but will also feed in fields or drop from the air, or a perch, into water. It uses its long legs to wade through shallow water, and spears fish or frogs with its long, sharp bill.

As large wading birds, Great Blue Herons are able to feed in deeper waters, and thus are able to harvest from niche areas not open to most other heron species.

This species usually breeds in colonies, in trees close to lakes or other wetlands. Often such colonies include only Great Blue Herons but sometimes they nest alongside other species of herons. These groups are called heronry (a more specific term than rookery). The size of these colonies may be large, ranging between 5–500 nests per colony, with an average of approximately 160 nests per colony.

Great Blue Herons build bulky stick nests, and the female lays three to six pale blue eggs. One brood is raised each year. If the nest is abandoned or destroyed, the female may lay a replacement clutch of eggs.  Reproduction is negatively affected by human disturbance, particularly during the beginning of nesting. Repeated human intrusion into nesting areas often results in nest failure, with abandonment of eggs or chicks.

Both parents feed the young at the nest by regurgitating food. Parent birds have been shown to consume up to four times as much food when they are feeding young chicks than when laying or incubating eggs.

Eggs are incubated for approximately 28 days and hatch over a period of several days. The first chick to hatch usually becomes more experienced in food handling and aggressive interactions with siblings, and so often grows more quickly than the other chicks. Predators of eggs and nestlings include turkey vultures, ravens, bald eagles, raccoons, larger hawks and owls. Very few birds or animals risk encounters with the adult Great Blue Heron, for its sharp and powerful bill is capable of inflicting serious wounds. (something GROWLS rescue volunteers always have to be very aware of when dealing with a sick or injured heron)

NOTE: If you would like to see these birds a great place to go on Gabriola is to the beach access that is right beside our local cemetery on South Road. In low tide, the mud flats out there can be a heron heaven. I have seen as many as a hundred of them down there, along with bald eagles and of course hoards of gulls. Well worth the very slight effort.