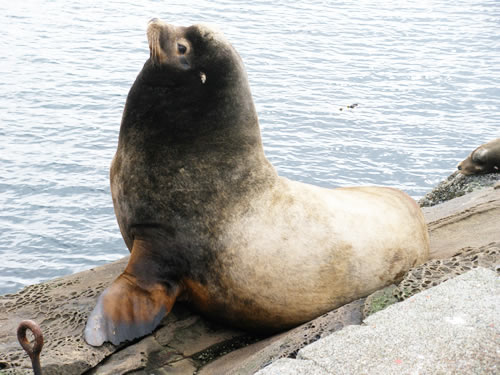 Two species of sea lions occur in British Columbia waters, the Steller’s and California sea lion. They belong to the family Otariidae or eared seals. Graceful swimmers, they are equally comfortable ambling over land using their front and back flippers. Rocky outcroppings, rocky shores known as “haul-outs” are where both species hangout together. They need to rest, give birth, and suckle their young on land.

Arriving in December a large colony of one hundred to two hundred sea lions have taken up residence on the rocky shore of Entrance Island Light Station. They are here for the herring spawn and will stay until April before dispersing to the breeding rookeries. Who has not heard the exuberant barking and/or deep growls as they communicate with each other? 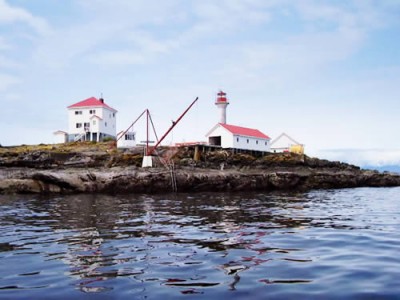 Transient killer whales are feared by sea lions as they prey on both species. Fishing nets trap, entangle and drown sea lions as they slip in to feed on the banquet of fish caught in the nets. GROWLS has had calls about some unfortunate sea lion with netting wrapped around their heads or bodies cutting deep in to their skin.

STELLER’S SEA LIONS are named after George Wilhelm Steller a naturalist who studied them in 1798 off the Russian Coast in the Bering Sea. They are the largest member of the Otariidae family with the males or bulls weighing in at 450-1000 kg reaching 3m in length. Females are somewhat smaller at 180-230kg and 2.4m long. Pups weigh in at 20kg at birth and nurse for a year. They communicate by deep growls and leave the barking to the Californians. 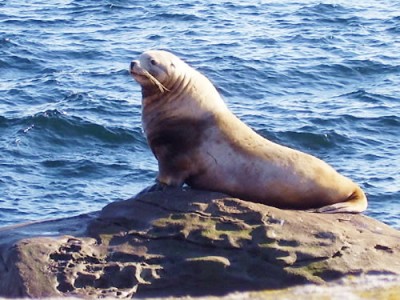 The males have a bulky build with a very thick neck, which resembles a lion’s mane, hence, the name sea lion. Their coats or pelage are light tan to reddish brown in color. During breeding season the males stake out a territory and up to 15 females. Pups are born mid May to mid June with breeding taking place 10 to 14 days after the birth of the pups. The gestation period is about one year. During the mating season the males do not eat so once the season is over they are off to fatten up on herring or other oily fish species.

Currently they are on the threatened list as their population has been declining since 1970. They range throughout the North Pacific rim form Japan to Alaska down our coast to California. Females can live up to thirty years but males have a twenty year span. 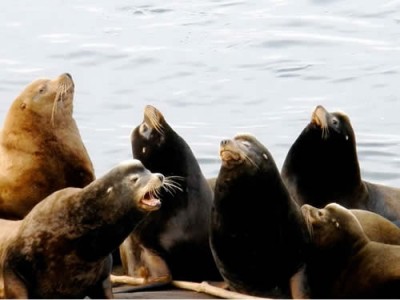 CALIFORNIA SEA LIONS are smaller and darker then Steller’s with a chocolate brown to black pelage when wet. Males have a ridge of bone or crest with a patch of light fur on top of their head. They are intelligent, playful and are usually the trained seals one see at zoos or aquariums. Barking is their favorite past time and in breeding season barking is one continuous event as they patrol their territories these are the sea lions you see porposing, jumping out of the water even surfing the waves. Another activity is rafting where groups come together lie on their backs/sides with their flippers sticking out of the water. ONLY THE MALES VENTURE UP TO B.C. WATERS, the females and young stay in California and Mexico. Breeding takes place there with pups being born in June and July. The males weigh 200-400kg and are about 2.5m long. Females are 70-100kg and 1.4-1,7m. pups are 6-9kgs at birth. This species population is increasing dramatically with clashes between the sea lions and humans. 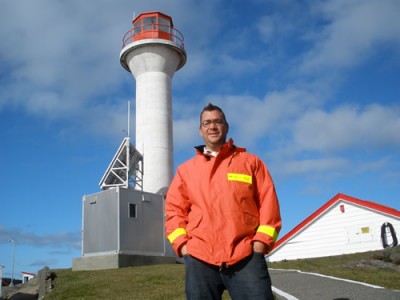 Jason Beukens, lighthouse keeper on Entrance Island has taken some dramatic pictures of the sea lions now on Entrance. Jason has also been noting and flipper tags/brands on the sea lions and has been reporting to the National Oceanic Atmospheric Administration in the U.S. One sea lion had been tagged in 1991 in California meaning it is now 18 years old. To see Jason’s photos visit click on Photo Gallery below.