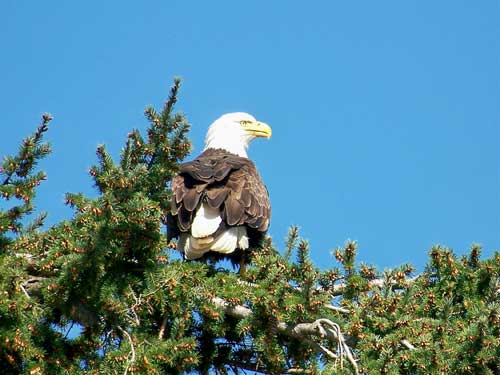 The bald eagle (Haliaeetus leucocephalus), is the only eagle that is unique to North America. The scientific name signifies a sea (halo) eagle (aeetos) with a white (leukos) head. At one time, the word "bald" meant "white," not hairless. Bald eagles are found over most of North America, from Alaska and Canada to northern Mexico. About half of the world's 70,000 bald eagles live in Alaska. Combined with BC's population of about 20,000, the northwest coast of North America is by far their greatest stronghold.

They flourish here in part because of the salmon. Dead or dying fish are an important food source for all bald eagles. Eagles pluck live fish out of the water generally out of a shallow glide. A bald eagle's lifting power is about 4 pounds and they sometimes take on a fish that is too heavy for them. This leaves them the choice of letting go (which they are unlikely to do if really hungry) or attempting to swim the fish to shore. They are very strong swimmers but can drown if overtaken by currents that are too strong or by hypothermia. Bald eagles do not generally feed on chickens or other domestic livestock, but they will make use of available food sources including carrion. They are often seen on Gabriola feeding on road kill alongside vultures and ravens. 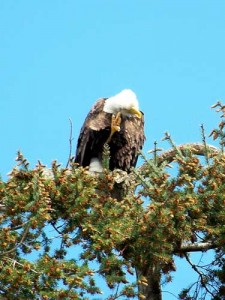 Eagles, like all birds, have color vision. An eagle's eye is almost as large as a human's, but its sharpness is at least four times that of a person with perfect vision. The eagle can probably identify a rabbit moving almost a mile away. That means that an eagle flying at an altitude of 1000 feet over open country could spot prey over an area of almost 3 square miles from a fixed position and they can certainly spot a fish swimming in the water from several hundred feet above.

An eagle reaches sexual maturity at around four or five years of age – this is also when they assume the familiar dark body with white head. At that time, the eagle's energies become concentrated on the effort of finding a mate and raising offspring. Bald eagles mate for life, but when one dies, the survivor will not hesitate to accept a new mate. Bald eagles build their nests in large trees near rivers or coasts. A typical nest is around 5 feet in diameter and eagles often use the same nest year after year. Over the years, some nests become enormous, as much as 9 feet in diameter, weighing two tons! Even when a nest tree falls or a strong wind blows a nest down, the established pair usually rebuilds at or near the site within a few weeks if it is near the breeding season. It is very important not to disturb eagles during nesting season. They can be driven away from their nest if they feel threatened. Wildlife trees containing eagles nests (as well as gyrfalcons, ospreys or great blue heron) are protected under the BC Wildlife Act and cannot be cut down. 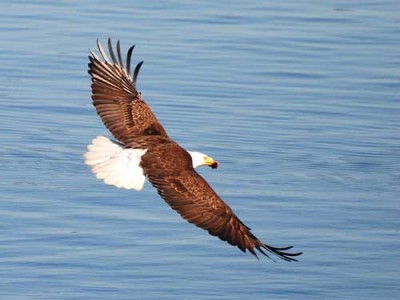 An exciting and non-invasive way of watching these glorious birds in their everyday life is to check out some of the many live web cams focused on certain nests in the area (and around the world). A good place to find these cams is by checking out the Hancock Wildlife Channel at discuss.hancockwildlifechannel.org