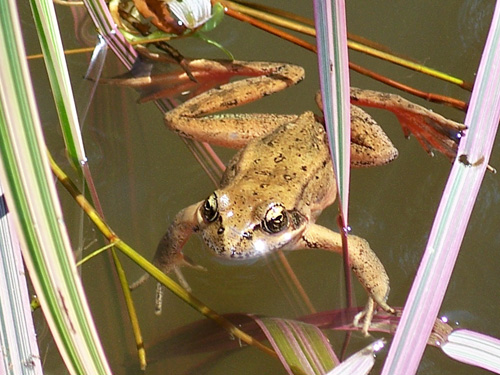 The Red-legged Frog Rana Aurora is the largest frog found on Gabriola. This handsome frog has smooth brown or slightly reddish brown skin marked by small black dots. Males are about 7 cm in length with females slightly longer at 10 cm. Prominent dorsolateral folds extend from behind the eyes down the sides of the back. The eyes are gold-coloured with a dark mask and a lighter stripe along the jaw running to the shoulder. The Rana (frog) Aurora (dawn) has long, slender hind legs, which on the underside are pink to red in colour, resembling the pink/red sky of a beautiful sunrise.

Amphibian from the Greek word amphi (double or circular) and bios (life) refers to the way most frog, toads and salamanders start life in water and later metamorphose (change) into a form that can live on land but must return to the water to reproduce.

Forested wetlands, moist coniferous or deciduous forests are home to the Red-legged Frog. They enjoy the cool temperature of the coastal forests. Adult frogs often take shelter under logs or other debris to stay cool and damp. Although they do spend a lot of their time on land away from the water, breeding takes place in slow-moving streams and shallow ponds.

Mating and egg laying begin as early as January or February. The males start calling to attract females but from a rather unusual place-up to a meter underwater. Jelly-like clusters, about the size of a grapefruit, containing 750 to 1300 eggs are laid by the females who look to attach the clusters to aquatic plants located just below the water’s surface. Embryo development takes about four weeks and then the tadpoles hatch and remain in that stage for four to five months. Tadpoles are herbivorous and feed on algae that grows in the waterway. Mid-summer the tadpoles complete another change into tiny hopping froglets. Within a few weeks, they become juveniles and by summers end, are adults. The adult Red-legged Frogs hunt along the edges of the waterway and eat insects, snails, worms and other crustaceans. Owls, kingfishers, and garter snakes prey on Red-legged Frogs.

We are all familiar with the exuberant singing of the Pacific Tree Frogs in the spring. Well the Red-legged Frog for its size simply has a very deep repetitive uh-uh-uh-uh-uh lasting 1 to 3 seconds. (To hear their calls see website listed below) 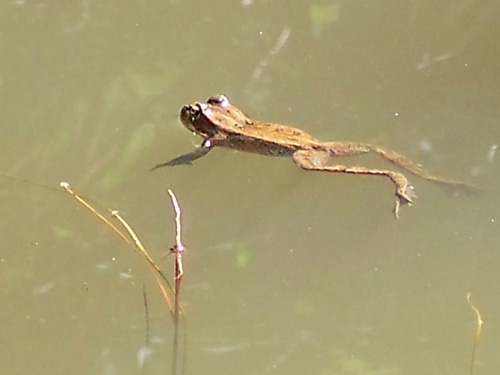 Frogs and other amphibians are not furred, finned, or feathered but have moist permeable skin that absorbs their oxygen and water requirements. This makes them susceptible to changes around them, which further up the chain of life affects the human population. A sharp decline in amphibians especially frogs was noticed by scientists about ten years ago. It has now been decided it is not one single factor but a myriad of causes. What is distressing is that many of these causes are related to human activity, habitat loss, pollution, agriculture, ozone depletion (increased UV) and disease. Red-legged Frogs are nationally listed as Special Concern by the Committee on the Status of Endangered Wildlife in Canada (COSEWIC), and they are on the Provincial Blue List. The Blue List is any species considered to be of special concern in B.C. because of characteristics that make them particularly sensitive to human activity or natural events.

How can we help? OBSERVE, PROTECT, PRESERVE. Check out wetlands and ponds in your area or when you walk through the parks on Gabriola. Join B.C. FROGWATCH to learn more about these frogs and other species. Tell others and get them involved. Speak up for frogs and attend meetings such as the review of our OCP to have a say. The Islands Trust and GROWLS hosted a Frog Monitoring evening in 2008 and 65 Gabriolans attended. Visit SMALL SPECIES SANCTUARY here on Gabriola. Create wetlands in your yard, and they will come.