The Pacific Banana Slug ariolimax columbianus is one of three very large slugs found in BC. In fact the Banana slug seen here on Gabriola is the second largest slug in the world and is native to BC. This slug grows to over 20cm. It is identified by its grey or olive green colouring and often has black splotches along its body and sometimes can even be bright yellow.  (Two other slugs that are voracious garden pests the Great Grey European slug and the European Black slug are not native to BC)

The Banana slug is considered a good slug as it is usually not found in our gardens but prefers the natural habitat of the forest floor and the cool temperament of the rainy coastal winters. It is known as nature’s garbage collector as it slowly glides along on a trail of slime consuming dead or decaying matter, animal feces, and mushrooms. It is marvelous recycler and through its droppings excretes a soil humus and nitrogen rich fertilizer and then new plants grow on the forest floor.

Slugs are slimy and this slime is used for protection as it enables the creature to slowly glide along over a variety of surfaces. If you have ever gotten slug slime on your hands and try to wash it off it is almost impossible. The reason is that slime can absorb up to 100 times its original volume in water. It is suggested you wait for it to dry then peel it off as you would rubber cement. During the heat of summer slugs cover themselves with slime and burrow into leaves and soil and estivate (hibernate) until the rainy season starts.

People often recoil when they see these large slugs perhaps because they do not understand the important role these slugs play in the eco system. Strange looking as if from a time long ago slugs have four tentacles. Two being pointy stalks on the top of the head are eyes, which distinguish changes in light and movement. Low to the ground are two more tentacles, which the slug uses for touch and feeling as it moves along. On the right side of the slug’s mantle is a hole known as a pneumostome and this where air passes through to a simple lung-like organ. Slugs have a single large foot and undulating muscles, which moves them along on their slime trail at about 17 cm per minute. 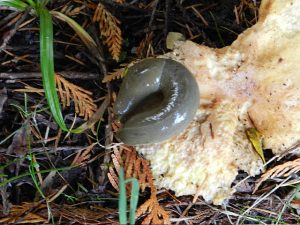 Slugs are hermaphrodites, which means they have both male and female sex organs. Slug sex is a long drawn out slimy affair but is one of natures most provocative and intricate couplings. How do they find each other?  Once again they lay down slime that contains pheromones to attract other slugs. They produce up to 75 translucent eggs in protected areas on leaves or in logs. The eggs hatch after about three weeks and the process begins again. Slugs are absentee parents and once the eggs are laid they are abandoned.

Predators consist of humans but raccoons, garter snakes, ducks and geese also eat slugs.  Shrews and moles often eat juvenile slugs. It is thought that Banana slugs can live up to seven years in the wild. 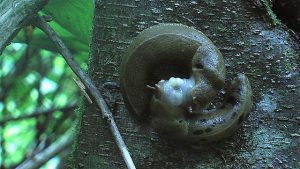 When you are walking in the Gabriola woods and you see one of these incredible creatures stop a moment and take the time to observe this intriguing slug.  Remember they do play a very important role in our forests and if by chance they are in your garden then gently move them out to the forest so they can continue to live their wild lives.

Want to know more about slugs ?

“Living Things We Love To Hate”  by Des Kennedy