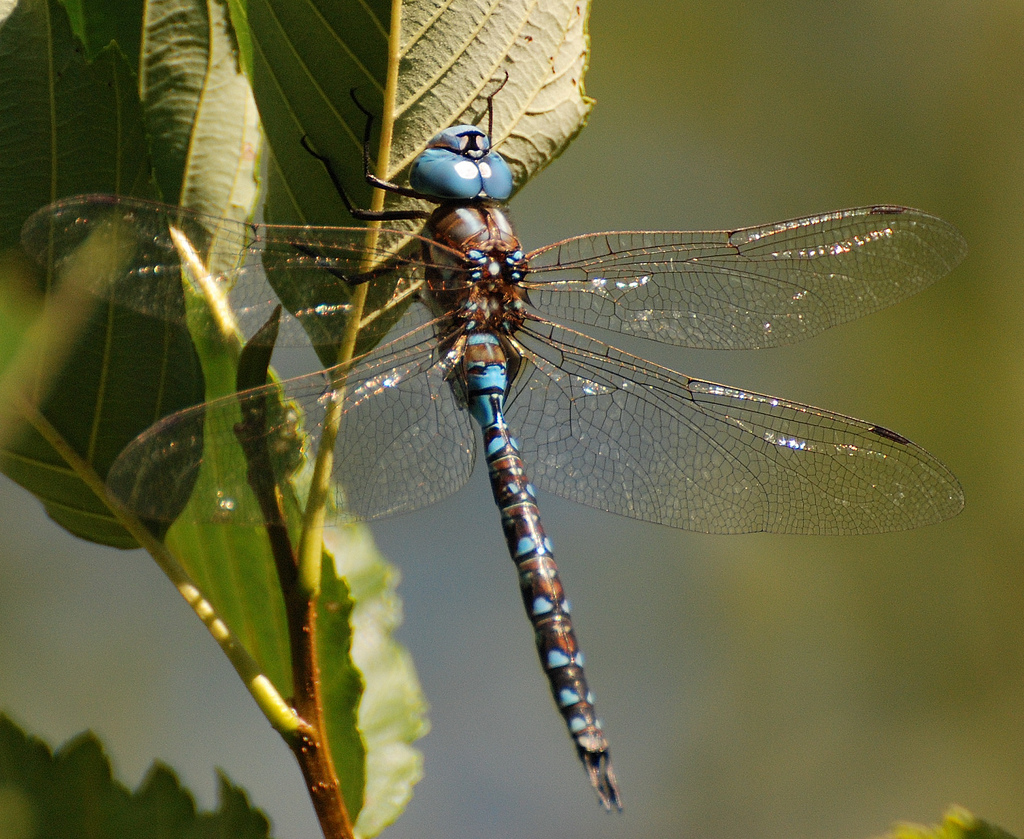 Dragonflies the largest member of the insect family in BC belong to the order of Odonata (Greek for toothed jaws), with over 80 species in our province. There are two distinct sub orders: Zygoptera (joined wings) are Damselflies which are slimmer, smaller and fly more slowly holding their winds above their bodies when resting and the Anisoptera (unequal wings) are Dragonflies which are robust fly rapidly reaching speeds of 100km/h and whose wings are held flat with the hind wings broader then the foreword wings.

They are an ancient species with fossilized wings found dating back 300 million years, as old as the first reptiles. Contrary to some beliefs they do not bite or sting. Their eyes contain 30,00 lenses and are positioned so they have a 360 degree field of view. Dragonflies are often found carved on totem poles and spoon handles of the Haida and Tsimshian peoples. The Nootka called them “clacking sticks “ after the cedar tongs used to remove coals from the fire.

There are three stages to the life of a Dragonfly: egg, larvae/nymph, and adult. The lifetime of an adult Dragonfly is about two months. Fresh water ponds and marshes of cattails, bulrushes or sedges is where they call home. They seek out the sunshine only leaving the water as nightfall’s resting in the vegetation until dawn.

Dragonflies are now at peak activity as males seek out females. When they find a female the male grasps her by the top of her head with claspers located at the end of his body, then the female loops her body to touch the male where the sperm is stored crating a “wheel position “ and the eggs she is carrying are fertilized. They may stay clasped together in the wheel position even as the female deposits her eggs as the male is jealously guarding her from other males. Eggs are dropped directly in to the water or deposited on aquatic plants where they emerge as larvae/nymphs and overwinter in the pond.

Larvae are strange looking creatures. With an enormously enlarged, hinged mouth, which also is armed with hooks, the larvae are able to extend this jaw to catch food and then when not in use fold it away behind its head. The larvae also breathe through their rectum. By pumping water in and out, the oxygen and carbon dioxide are exchanged though gills lining its walls. This pumping action also allows the larvae to make a quick escape, as it squirts water backwards it becomes jet propelled and quickly disappears to a safe place in the pond.

In late spring the larvae leave the pond and a wonderful metamorphous takes place. After finding a plant stock or other means of support, the skin on its back splits open and the adult dragonfly squeezes out. In about an hour with its wings extended and blood coursing through the wing veins, its body hardens and it takes to the air leaving behind the empty larvae skin.

Dragonflies are superb predators, incredibly agile and by forming a basket with their spiny legs they catch lunch on the fly. Other small flying insects, midges and the dreaded mosquito are dragonfly’s idea of eating out. Dragonflies in turn are an important food source for birds especially merlins and falcons.
These magnificent flying dragons with their remarkable flight, intense colours and interesting ecology do need our help as some species are at risk. As we fill in wetlands and marshes entire ecosystems are affected. Look around your property and protect or enhance existing wetlands, perhaps create a pond or pool. Build it and they will come.

We all need to take a moment in our lives to sit in a quiet place and watch how other wild creatures live out their wild lives. In these last days of summer you will be rewarded with a sense of tranquility and be one with nature ---even for just a moment.